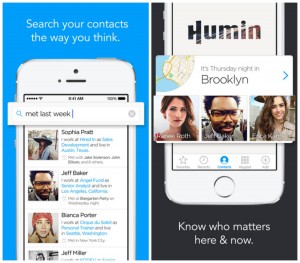 Tired of meeting awesome people at parties and never being able to remember their names when you run into them at Starbucks? Sick of scrolling through your phone’s contact list trying to recall “that you girl you met at that conference?” Don’t think your phone is smart enough? Humin agrees. That’s why it recently launched a free app that turns your phone’s alphabetical contact list into an intuitive data powerhouse that works the way you think. An even smarter smart phone?! You bet you’re interested! Read on.

What It Does: Humin links into your phone, email accounts, calendar, Facebook, LinkedIn and other social networks to combine contacts into a consolidated list that’s not only jam-packed with meaningful context but is also searchable through this context – such as mutual friends and where and when you met. Beyond just adding helpful and intuitive annotations to your contacts, the app reorders them based on key details like who’s in town or who’s just a few blocks away or who’s just received a major promotion. It’s your Apple Contact’s list on brain boosters. 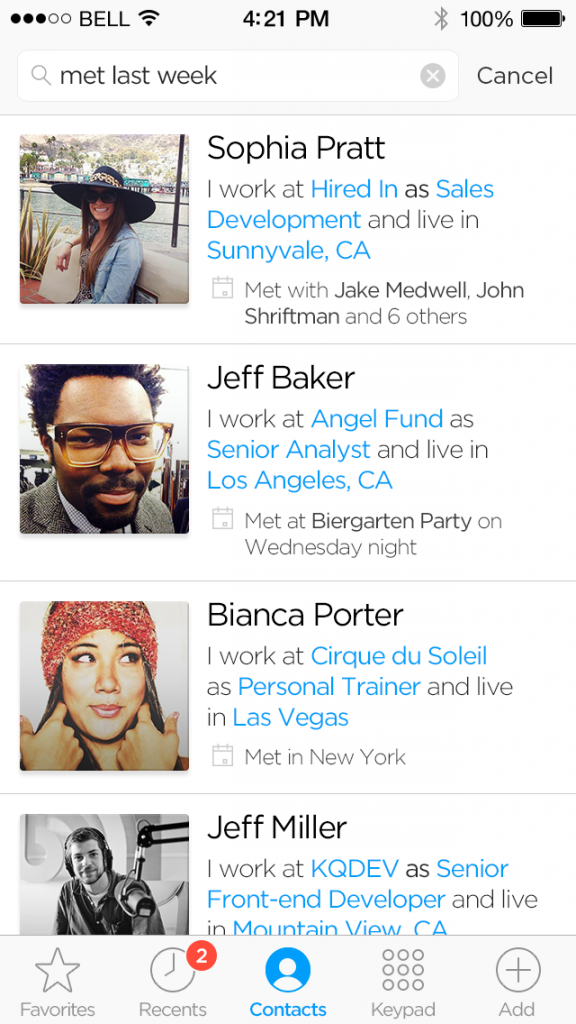 How It Got Started: Dubbed the “best-connected 21-year old in the world” by Fast Company three years ago, Humin co-founder and CEO Ankur Jain is destined for exceptional success in the tech world. At 18 he co-founded the Kairos Society, an annual conference that connects college entrepreneurs with corporate executives and major public figures like Bill Clinton. Just a few months ago, 20,000 “of the world’s influencers” – including Will.i.am, Richard Branson, and Angry Birds creator Peter Vesterbacka – tested the beta app; many of these influences are friends and mentors that he’s made through his father, Naveen Jain, a wildly successful angel investor and CEO of Intelius, which sells lists of public contact information and most likely provided the fodder for Jain’s conception of Humin.

How It Works: “Think of it like page rank for people,” explains Jain. Search results are ordered to display relevant people based on the user, time of day, place and relevance. If you can’t remember someone’s name, just search “met earlier today” or “Amy’s party” or “three months ago in Austin.” “It’s designed the way you think,” says Jain. Humin learns what’s relevant to you over time and uses that data to better sort your contacts so that it doesn’t just begin with Aaron Aackey, that guy you haven’t talked to since 8th grade.

The Competition: LinkedIn recently launched Connected, an app that tells you key information about each contact such as where you first met, where they work and how you’re connected. Connected is designed to help users stay connected with their professional contacts while Humin takes a professional and a personal perspective. Too, Humin’s intricate software grabs more of your data: it tells you when you last hung out, how many friends you have in common, where each contact is and when they’re available to hang out. So what’s stopping Google or Apple from copying and then beating it? Well, Humin is the first contacts app that processes all of its data on a person’s smartphone instead of relying on servers, which means that contacts are searchable even without a signal. It’s a pretty impressive feat.

The Future: It’s not entirely clear how Humin will make money. Jain has mentioned creating business versions of the phone and developing special features that will add key value to major corporations. Currently only Apple-ready, Humin plans to enter Android and Google Glass in the not too distant future. As far as longer term goals, Jain has mentioned adding Humin as an app in cars. Holding himself to Steve Jobs’ ambition to use contacts “like never before,” Jain isn’t shy about his plans to develop an unbeatable web of human digital connections. The future looks bright for this one.