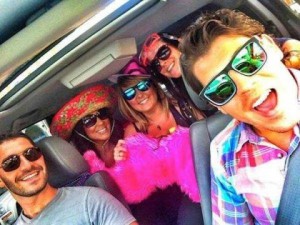 Silicon Valley is the red-hot center of modern technological activity. Given our firm footing in an Information Age – in which all economic activity hinges on the efficient transport and clustering of digital information – that’s tantamount to proclaiming Silicon Valley the center of the world. The reign of New York and its bankers and artists is over. Today belongs to the techies. In full recognition of this seismic shift (which has been underway since before the dotcom days), MathSP will introduce you to one new startup with each edition of its newsletter. This series will detail how these startups began, what makes them exciting, the current landscape of competition, and where these startups are headed. To start this series off, we’re introducing you to a startup by the name of Lyft. If you’ve ever seen a car with a pink mustache on its front bumper, you’ve been witness to an aggressively expanding application that lets its users request friendly, safe and affordable transportation.

Slogan: Your friend with a car™

What It Does: an application that connects riders to drivers. Riders download the app for iPhone or Android and request a ride with the tap of a button. Within just a few minutes, your driver will pick you up and greet you with a friendly fist bump. Lyft drivers are background checked and interviewed to ensure the best and safest ride experience. Lyft riders are encouraged to sit up front. After all, you driver is your new buddy, not your chauffeur.

How it Got Started: Driven to start a business that would bring people together, lower carbon emissions, and help people spend less money on transportation, Zimmer and Green started Zimride in 2007 as a peer-to-peer ridesharing company. During its beginnings, the company focused on providing viable ridesharing for long commutes and developing a car-sharing program that was exclusively executed on college campuses. Within 6 months of launching on Cornell’s campus, Zimride signed up 20% of the student body.

Honing In: Zimmer and Green launched Lyft as a service of Zimride in 2012 to give Uber low-priced private driver competition. Like Zimride, Lyft requires its drivers and passengers to sign up for the service through Facebook. To keep accountability and quality high, drivers and passengers rate each other on a five-star scale after each ride. Within weeks of its launch, Lyft exploded in popularity in San Francisco, which boasts more than 300 drivers with average hourly earnings of $30-35 to date. In May 2013, Zimmer and Green officially changed the company name from Zimride to Lyft to reflect their decision to focus exclusively on private driver commuting in urban environments. In July 2013, Lyft sold Zimride to Enterprise Holdings, the parent company of Enterprise Rent-A-Car. 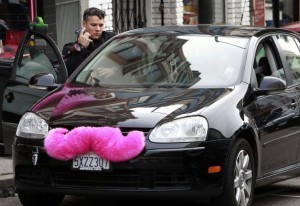 The Brand: Aptly summed up in the slogan “Your friend with a car™,” Lyft’s brand identity is all about building a playful commuter community. According to Zimmer, the fuzzy pink mustache that’s affixed to drivers’ cars represents a smile. Passengers are invited to sit in the front seat to create the feeling of riding with your friend.

Identifying the Opportunity: As a student at Cornell’s School of Hotel Administration, Zimmer took an Urban Planning & Development class called Green Cities. The class focused on the idea that the principles of simple design could efficiently and creatively improve large infrastructure. While carpooling with some of his buddies from Cornell, Zimmer recognized that 80% of the seats on American highways are empty, and yet, many people without cars feel that public transportation is their only option. Something had to be done.

An Inspiring Mission: “We see Lyft as not just an app, but a movement of people coming together in cities and having conversations about things that matter. You’re around some of the most interesting people in the world and you don’t talk to them. More and more people are craving in-person interactions,” said Lyft CEO John Zimmer to Business Insider. That’s why Lyft is angling to build a real-world social network that’s also the best way to get from point A to point B.

The Future: Lyft recently launched in 24 new cities, bringing its total to 60 cities. A major market that Lyft has yet to breach is New York City, whose formidable taxi business is preparing to keep Lyft out. To rival Uber on more fronts, Lyft announced on May 7, 2014 that Lyft Plus, a premium SUV service that will cost twice as much as normal Lyfts, is already underway in San Francisco. Its SUVs hold six passengers and feature diamond-stitching leather interiors, flashy ground lighting, and phone chargers. With more commuter options and an incessantly expanding market, Lyft promises to irreversibly change the way we traverse urban landscapes.