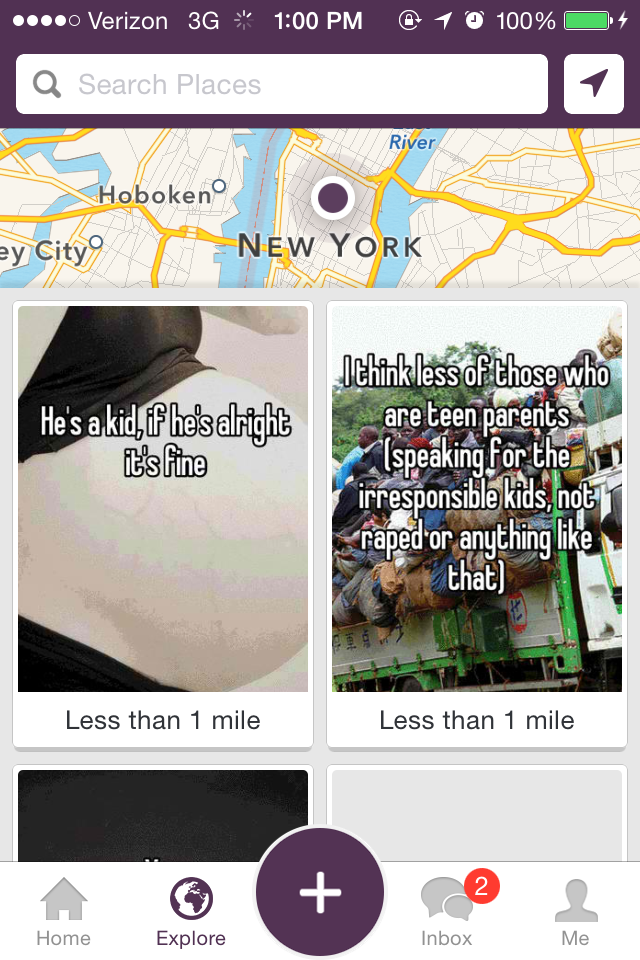 Ever wish you could share something on Facebook without having to attach your name to it? Often feel the urge to divulge a secret on Twitter? Ever thought, there should be a secure way to tell your best friend that his girlfriend is cheating on him that protects the messenger? Getting tired of having to curate a Facebook page that in no way resembles your actual life?

This month’s installment introduces you to a startup that’s tackling the pitfalls and drawbacks of our public, online user identities: Whisper, an anonymous social networking app that empowers people to share confessions, express themselves, and meet new people through common experiences that aren’t easy to discuss on identity-centric sites. If you haven’t heard of Whisper yet, enjoy these last few minutes of blissful ignorance – it’s just the latest social network that’s on the verge of blowing up!

What It Does: Whisper’s app enables users to anonymously share secrets with others. These secrets are communicated with photos that users can overlay with text. If you have no idea what this looks like and don’t want to download Whisper, just check out the popular PostSecret website that’s been around for years. Whisper uses the same kind of photo-and-text combo as the basic foundation for secret sharing and then provides a whole heap of features that turns this deceptively simple idea into a fully-fledged social network. Unlike PostSecret, Whisper equips its users with tools to reply publicly to other users as well as options to message each other privately – that is, for a fee.

How It Got Started: In an interview with TechCrunch, co-founder Michael Heyward explained that he developed the app as a pet project at TigerText, a secure messaging startup co-founded by Whisper’s co-founder, Brad Brooks. While developing the app with Brooks, Heyward realized that Whisper could be a powerful tool for users that want to share parts of their lives that they don’t feel comfortable putting on social networks. “When you look at any of these identity-based social networks, people are so concerned about their image that they only post really positive things. We saw a huge white space of things that people were not publishing, and wanted to give people a place to share these things that they wouldn’t feel comfortable putting out on social networks.”

How It Works: Whisper’s private messaging features are perhaps its biggest attraction. By protecting user-to-user messaging with a pay wall, Whisper has not only been able to raise quite a bit of revenue, it has also been able to guarantee a certain level of content quality for its users. Heyward notes that his team made the decision to make messaging a paid feature in order to deter inappropriate solicitations and users looking to turn Whisper into a craigslist marketplace.  Then there’s the ‘Nearby’ feature that allows users to see Whispers that have been posted within a given radius of their location. Unsurprisingly, this capability is a tad controversial; but Heyward insists that the mission of Nearby is to mitigate the loneliness that drives Whisper’s user-base: the app is architected so that the radius of Nearby Whispers is directly correlated to the volume of Whispers that have been posted so that users never feel like they’re in an empty room.

The Competition: The only other startup that operates in the anonymous social network space is Secret. Secret enables its users to share “anonymously” with friends or friends of friends, which tends to result in a guessing game of who posted the secret. Whisper’s reach is far greater in this respect: users are connected to other users regardless of affiliation; this significantly reduces impulses to backbite and all but eradicates the likelihood that you’ll be able to guess who posted what. Secret launched just this year in February so the jury’s out on how well it will do. For now, Whisper is in the lead by far.

The Revolution: Heyward and Brooks want to bring empathy back. “We’re living in this remarkable time where for the first time in human history people are learning about their peers based solely on what they want to show you…One of the things that’s so interesting about how we form opinions about ourselves is that we do it in relation to everyone around us. If my reference is that everyone else is awesome, then by default, I must be a loser. It’s creating a lack of empathy in the world… I want to live in an empathetic, more caring, more compassionate, tolerant, more understanding world… Whisper is not about concealing identity. It’s about creating a place where we aren’t carrying around this 800-pound gorilla with us that we call our identity,” says Heyward to TechCrunch’s Michael Arrington at a TechCrunch Disrupt event in NYC last May. 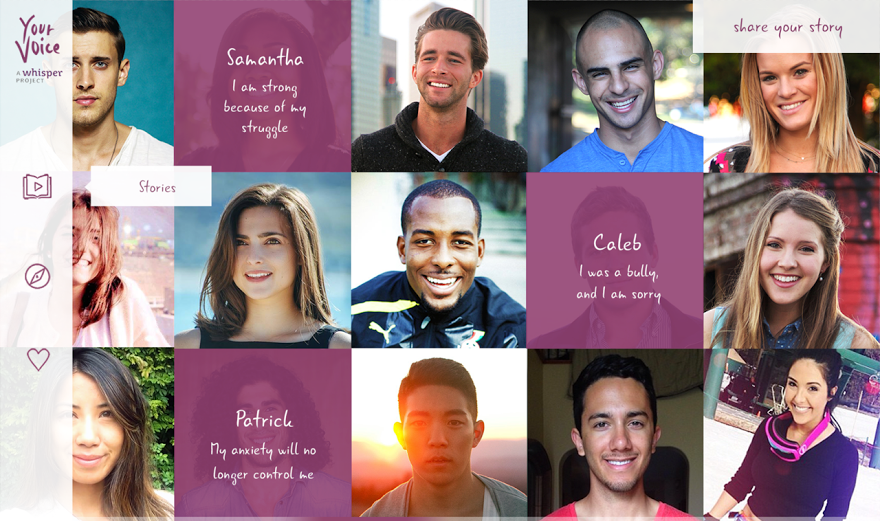 Your Voice: Before they launched Whisper, Heyward and Brooks decided to simultaneously launch a non-profit organization – Your Voice – that serves primarily as an information site for depression and suicide prevention. Just this month, the team announced that they are establishing a $1 million endowment for Your Voice as well as transforming the non-profit into a digital platform for Whisper users and others to discuss their struggles in the hopes that users will feel less alone.

The Future: In May 2014, Whisper received $36M in new funding from a pretty impressive list of Silicon Valley VC’s, including Sequoia and Thrive Capital. The startup has recently confirmed that it’s launching an updated version of the app that will make it easier for users to connect with others sharing similar thoughts and emotions. With new search functions and highlighted categories of content, Whisper users will be able to more easily discover the Whispers they want to see. The app is currently generating billions of app views per month – the last reported number stood at 3 billion monthly – but Heyward says that number is now “much higher.” The sky’s the limit for this social network that’s introducing real talk to our online lives.