A Core Guide to Math and Science for High School Students 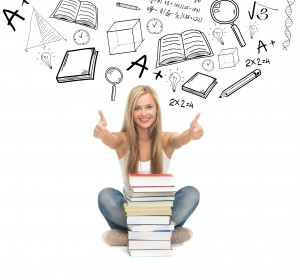 This branch of mathematics uses variables in the form of letters and symbols to solve various types of equations and everyday problems. A firm grasp of algebraic principles is necessary to understand subsequent math classes, including trigonometry, calculus, linear algebra, and statistics.

Example Question: Jennifer is 6 years older than Jason. Six years ago she was twice as old as Jason. How old is each now?

Geometry is not so much concerned with numbers as with size, the shapes and relative positions of various figures, planes, and general properties of space. Geometry certainly has many practical applications as any engineer can tell you, but it is also useful as a tool for pure thought insofar as its strenuous use of logic thoroughly trains the young mathematical mind.

Example Question: Daniel wants to put a new carpet in his bedroom, which is 10 feet long and 12 feet wide. If carpet costs $5 per square foot, how much will he need to spend?

Example Question: The admission fee at a small fair is $1.50 for children and $4.00 for adults. On a certain day, 2200 people enter the fair and $5050 is collected. How many children and how many adults attended? 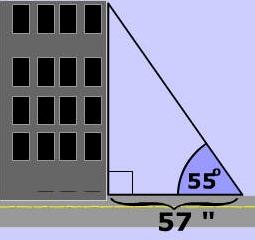 As a specialized form of geometry that studies the properties of triangles, trigonometry has applications as diverse as acoustics engineering, land surveying, oceanography and astrophysics. In fact, the discipline of trigonometry emerged when early scientists from the 3rd century BC tried to apply geometry to the study of stars and constellations. Its explanation of various interrelationships is critical for understanding the terms and ideas of calculus. Due to this fact, trigonometry courses are often labeled as pre-calculus.

Example Question: At 57” from the base of a building you need to look up at 55 degrees to see the top of the building. What is the height of the building?

Calculus is the branch of mathematics that deals with the properties and applications of derivatives and integrals. Calculus courses teach you the elementary concepts of differential and integral calculus that are required in business, economics, social sciences, and medicine. While the concepts of calculus are quite complex, the actual calculations follow a very clearly defined set of rules. To pass a calculus course, you need only learn the rules of derivatives and integrals; yet, truly understanding the concepts yields a much more rewarding experience and a much more successful entry into the many specialized fields of mathematics that require a rock-hard foundation of calculus.

An offshoot from the main path in secondary school mathematics, statistics offers a clear view into the real world. This branch of mathematics is intensely interested in the examination of actual data and how that data can be used to make observations, predictions and conclusions.

Example Question: You run an office that employs 23 people. What is the probability that two of your employees have the same birthday? For the purposes of the problem, ignore February 29.

While not technically an accounting class, business math gives its students a practical understanding of the math required for most business needs. It combines basic algebra, some statistical math and a smattering of accounting principles. If you’re looking for the simplest way to understand the math needed in the real world, business math is for you.

Economics concerns the study of human actions and interactions with regard to production, consumption and the exchange of material wealth. Economics explores the concepts and conditions of scarcity, unemployment and poverty rates. It is particularly interested in how consumers and producers make decisions and how those decisions impact local, national and global communities; thus, economics not only applies mathematical principles to generate predictions and solve problems, but also employs psychology, cognitive science and cultural studies to ascertain and leverage how people interact with the marketplace.

If concepts like electricity, gravity and magnetism are your thing, you might want to follow Einstein’s lead. Physics is a branch of science concerned with the nature and properties of matter and energy as they relate in space and time. In physics you’ll study how things move, and the forces that make them move. Like math, physics can be applied to any observational science. If you establish a solid foundation in physics, any field of science is open to you.

Example Question: A ball is dropped from a height of 10 m. What is its velocity when it hits the ground?

Physics and chemistry are really two sides of a coin in that they are both specializations of physical science. However, chemistry focuses on the properties of substances and the interactions between different types of matter, including even the smallest forms of matter: subatomic particles. Chemistry is useful because it explains everyday things such as why salt and sugar dissolve in water and how matter can take solid, liquid and gaseous forms.

Example Question: You have 4 moles of O2 and 2 moles of FeS2 and are given the following balanced equation: 4FeS2 +11O2→2Fe2O3 +8SO2. Which reactant is the limiting reagent? Focus on developing these core math and science skills in high school to lay a strong foundation for your future. If you find yourself struggling (or if you want to get ahead), invest in a MathSP Academic Coach and jumpstart your journey to developing a “math state of mind!” We’ll take you where you want to go. MathSP’s expert Academic and Test-Prep Coaches are dedicated to equipping you with the strategies, problem-solving skills, and knowledge of core concepts you need to excel in math and in life!